"You have to imagine São Miguel as a mixture of a Hobbit country and Portuguese Switzerland, full of forests and lush green meadows. The streets bordered by stone walls remind you a little bit of Ireland, with hydrangeas and azaleas everywhere. Sometimes you get the impression to be in Scotland, but the palm trees do not fit into the picture. It is as if you were landed in the middle of the Atlantic in an all-European theme park with a tropical touch."
Citation, focus online, 02.07.2017

Where are the Azores?

If you ask this question, you are already on the best way to fall in love with a landscape and nature paradise that many people know by name only from the weather report. 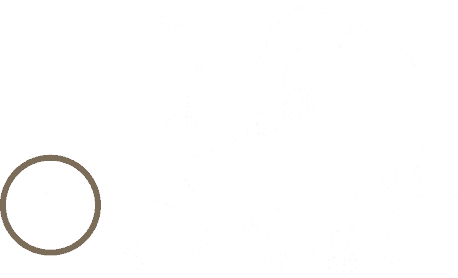 The archipelago of the Azores is located 2 hours west of Portugal's capital Lisbon, northwest of Madeira in the middle of the Atlantic. A climatic advantage of the Gulf Stream, plants of all climate zones find ideal conditions to give the idea of  a "Garden of Eden" shape. Presumably it is this harmonious combination of the living nature with the grandiose landscapes created by volcanic forces, which has such a powerful effect on the visitor. The rest is certainly the hospitable population, whose peaceful lifestyle is soon transmitted to the visitors.

The nine islands that form the Azores archipelago are of volcanic origin and lie between 37° and 40° north latitude, and between the 25° and 31° west longitude. The islands also form the westernmost point of Europe.

The autonomous region of the Azores belongs to Portugal and the EU, has a population of 244 780 (2008) and covers a total area of  2325 km². The Azores archipelago is divided into three geographical regions. The islands of Santa Maria and São Miguel form the eastern group, Terceira, Graciosa, São Jorge, Pico and Faial the central group and Corvo and Flores the western group of the archipelago. Madeira, the Canaries and the Cape Verdi islands represent, together with the Azores, the territory of Macaronesia (Islands of Happiness). 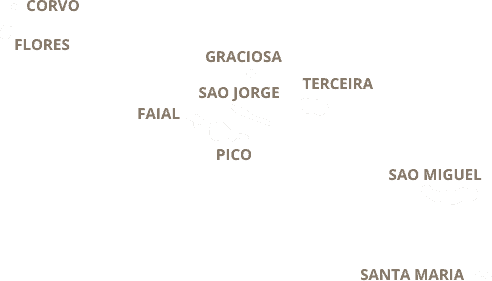 São Miguel is the capital of the Azores, with a population of 745 sq. Km (133,000) and economic power. The island is nicknamed "Ilha Verde" (Green Island) due to its lush subtropical greenery. São Miguel is unique in terms of its natural beauty: forested mountains, huge craters with quiet lakes, lovely hillsides with lush meadows and fields and also magnificent coasts with picturesque villages and historic towns.

The coasts often fall steeply and rocky towards the sea; The north coast is a bit rougher and rugged than the more charming, almost mediterranean-oriented south coast, with some nice sandy bays and beaches. Boiling fumaroles and hot springs in the valley of Furnas testify to the volcanic forces. The bustling capital of Ponta Delgada has a beautiful old town, decorated in the colors black and white.

If one compares the two climatic tables together, Majorca and the Azores, the following results are obtained:

Four months of summer are less hot on the Azores.

Beside July and August it is colder on Mallorca. And in the winter unpleasantly cold. Amd: The Azores have pleasant temperatures in winter.

Mallorca has in the year cut exactly one third more. For some people beautiful, for the others less.

During three months, the Mediterranean is warmer, but the Atlantic is it within 8 months. 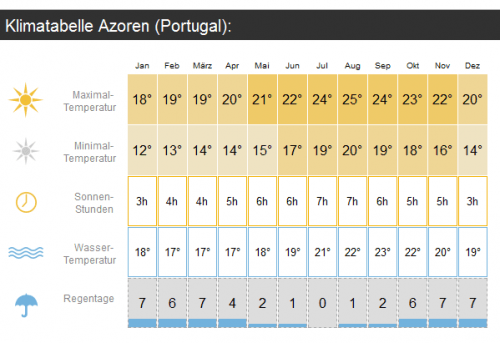 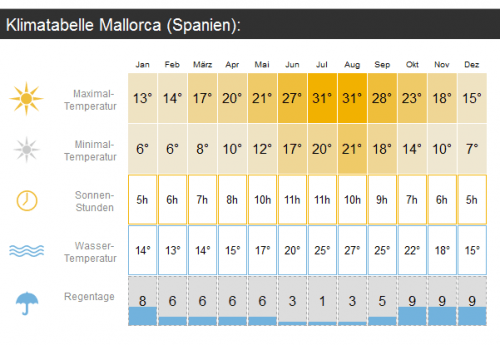 If you are still not sure if the Azores are the right holiday destination, you will find a 90 second video clip right here.