to the Casa Bela Vista II

We gave our house the name"CASA BELAVISTA", which means "HOUSE BEAUTIFUL VIEW". The holiday home is located on the Azores island São Miguel above the village Pedreira / Nordeste with a great view over the north-east. There is a fantastic view over the village and the ocean. A 40 sqm veranda with a built-in barbecue corner lend you outside. If the wheather is not so good, you can enjoy the view from the jakuzzi bath through the huge bathroom window. For hikers, the CASA BELA VISTA is an perfect starting point.

The 200 year old building built ot of volcanic stones we bought in August 2015 as a ruin. We than rebuilded the house completely from October 2015 to October 2016, whereby we have tryed to preserve the original character of the house. For this purpose, we left certain elements such as the window frames and the doorsticks - original. The highlight of the house however is the hughe bathroom, with the walk-in shower and a jacuzzi bath overlooking the north-east of the island! The kitchen is equipped with all modern kitchen appliances (including dishwasher) and allows to cook well, to fry and to bake. 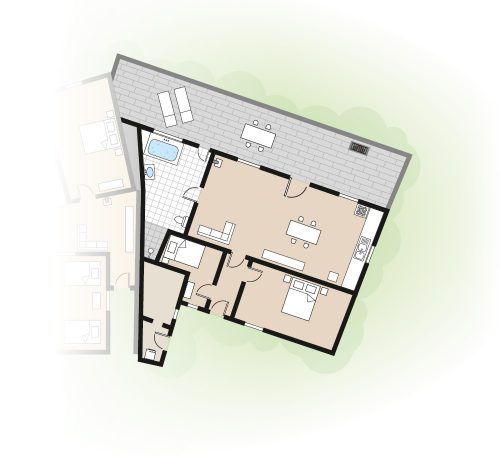 If you want to book one of the houses, we are looking forward in getting a message or just call us:

You want to buy a holiday home?

If you think abaout to purchase a holiday house on São Miguel - we will be happy to help you!